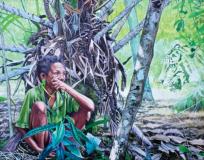 John Hurford was born on a farm in North Devon in 1948.At the end of the sixties he was a leading artist in the counter-culture. This early work is in the collection of the Victoria and Albert Museum in London. He has had work in many galleries including Tate Liverpool, the Whitney in New York and has featured in two recent sell out exhibitions at the V&A. "You say you want a revolution" (about the sixties counter-culture) and "Their Dark Materials" (The history of the Pink Floyd). Since then he has been farming and painting in Devon, writing and illustrating books, designing record/CDcovers and posters worldwide as well as putting on solo and group exhibitions of painting in the South West. His inspiration is still the surrounding countryside and gardens. His work continues evolving.