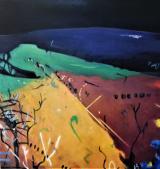 Alan was born in Surrey. He studied at the Wimbledon School of Art and later at the Guildhall of Music. For many years he followed a career in music but on moving to Devon he has worked principally as a painter. Exhibiting widely in the South West, his work has been shown at the West of England Academy, Plymouth City Art Gallery, and The Penwith Gallery, St Ives. In 2012 he was awarded the SWAc Lionel Aggett painting prize. He is a member of the Plymouth Society of Artists and for many years served as a Trustee of the South West Academy. His paintings are abstract and mostly inspired by landscape.