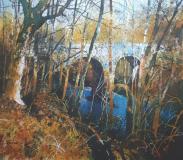 Bridge on the River Coney, France